THE GIST OF THIS LOVE STORY IS TYPICAL – BOY MEETS GIRL, FALLS IN LOVE, GETS MARRIED; BUT PEEL OFF THE ‘BAO SKINS’ AND YOU WILL REVEL IN MANY SUBPLOTS – STRUGGLING MUSICIANS; SOCIETAL PRESSURE; RELIGIOUS EPIPHANIES. JACOB AND RUBY OF SINGAPORE CHAR SIEW BAO! UNMASK THEIR INTROVERTED IDENTITIES FOR A MAUDLIN ROMANCE. 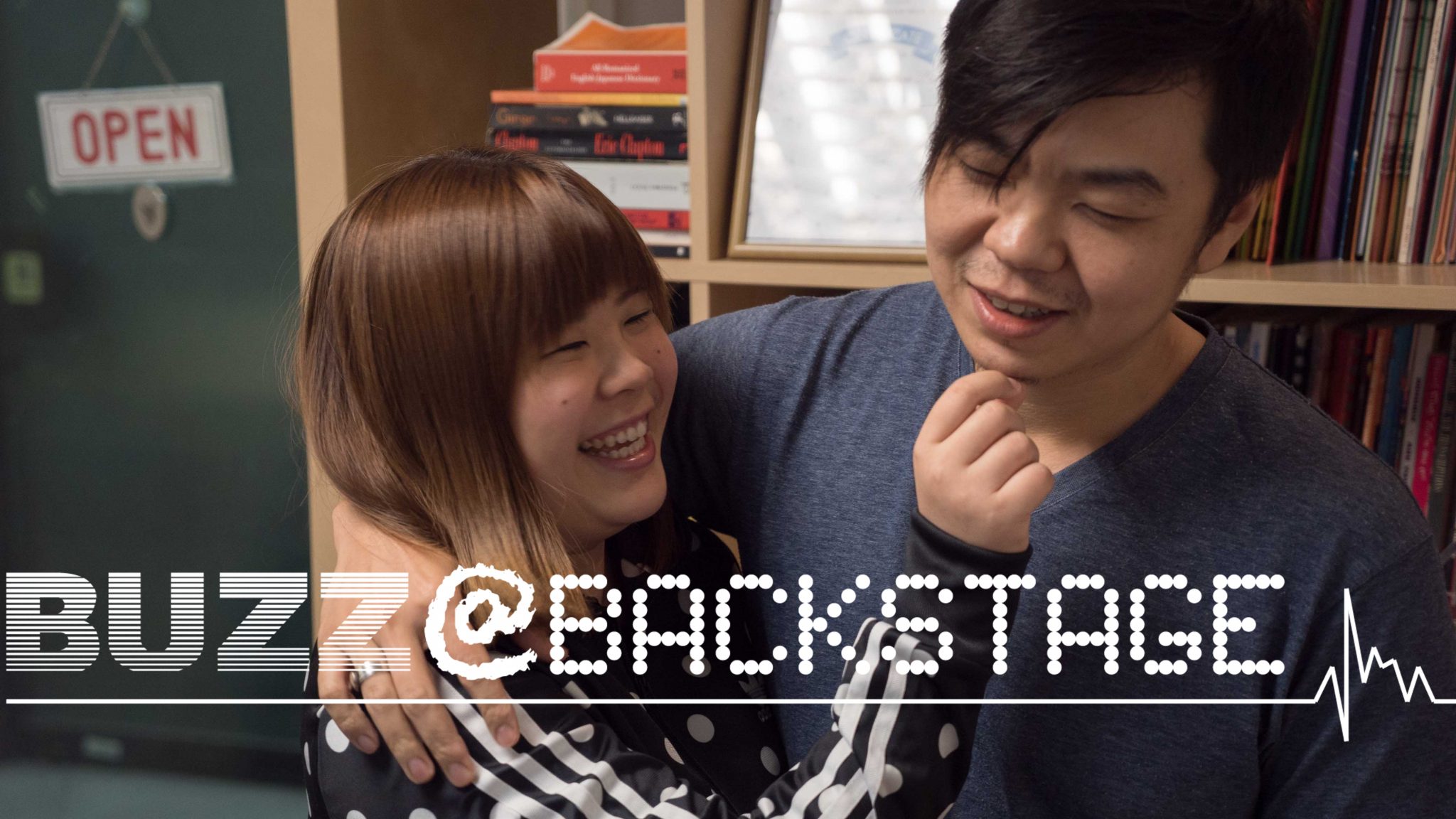 Unbeknownst to many, Ruby and Jacob of Singapore Char Siew Bao! have been dating for 8 years. Their demeanour and body languages as bandmates do not differ very much on and off stage, and you would only sniff it out if you observed close enough. That being said, you might even start clapping when you see them hold hands, hug or kiss in front of your very eyes.

One thing though, they are inseparable. Buy one, get one free. Hire Ruby? Hire Jacob as well. That is almost always the case. OK, maybe not ‘free’, but you get the drift.

Having met each other in school a decade ago, it was music that gave an excuse for their paths to cross. “Hey Ruby, Jacob is a musician too!” which rang delightfully in the 22 year old girl’s ears as she barely started a career in singing then.

Jacob then, apparently walked around with his guitar in a standoffish disposition. A man of few words, or even none, it is surprising that he did not put Ruby, albeit a happy-go-lucky girl, off, after a few terrible handshakes and dismissive encounters. The bubby girl broke past his antisocial façade and they were soon both in a relationship, which has been cemented over many layers through their connection in music. 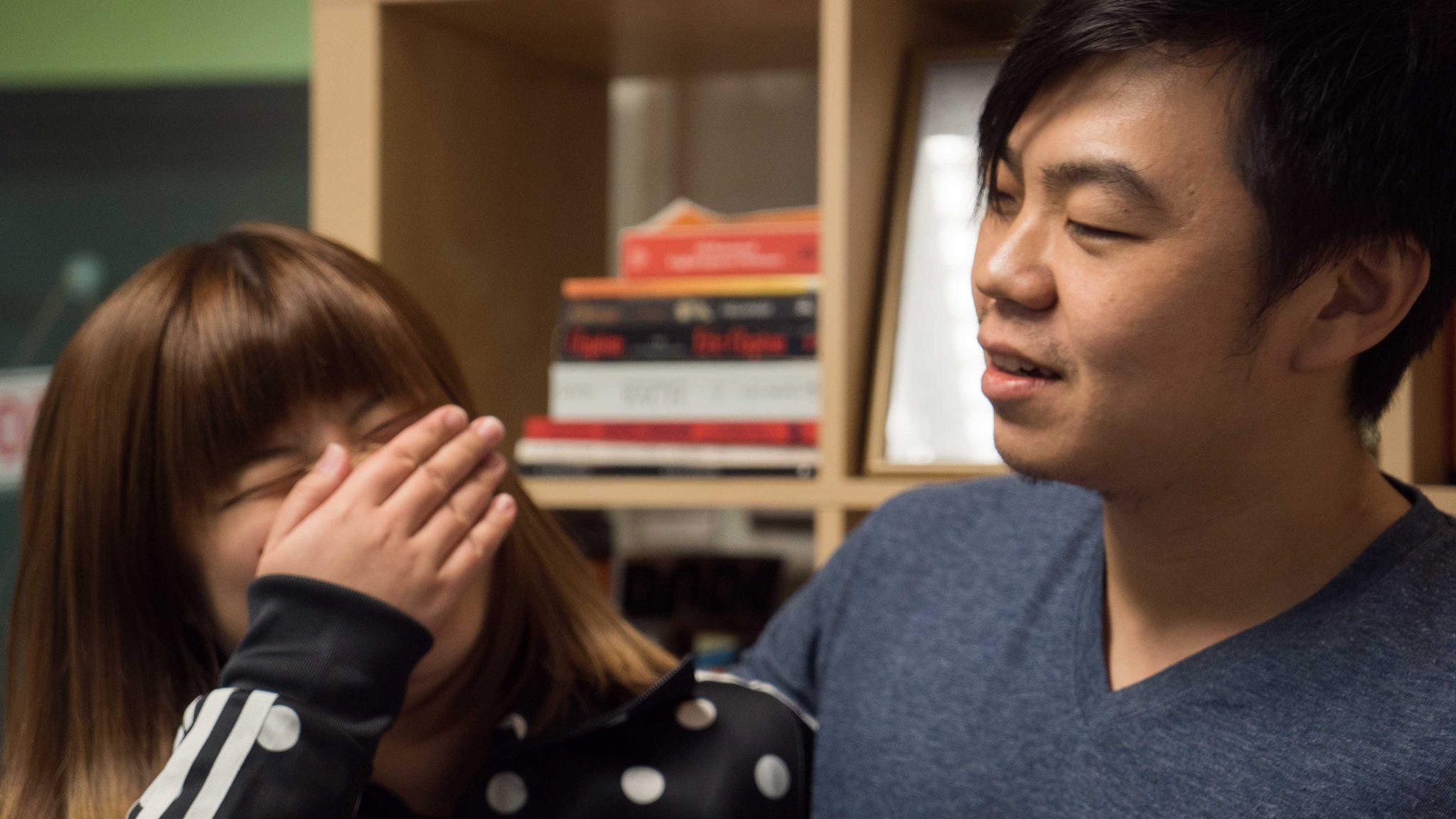 Singapore Char Siew Bao! started not long after they dated, with Jason Loo and Dominic Cai, who have seen the offstage tension and fights between them over the years. Despite the occasional quarrels, they would never let the disputes affect their gigs.

In fact, Ruby revealed adorably that their choice of songs, the lyrics and the unnoticeable eye contact the couple makes on stage is their cryptic mode of communication during a fight. 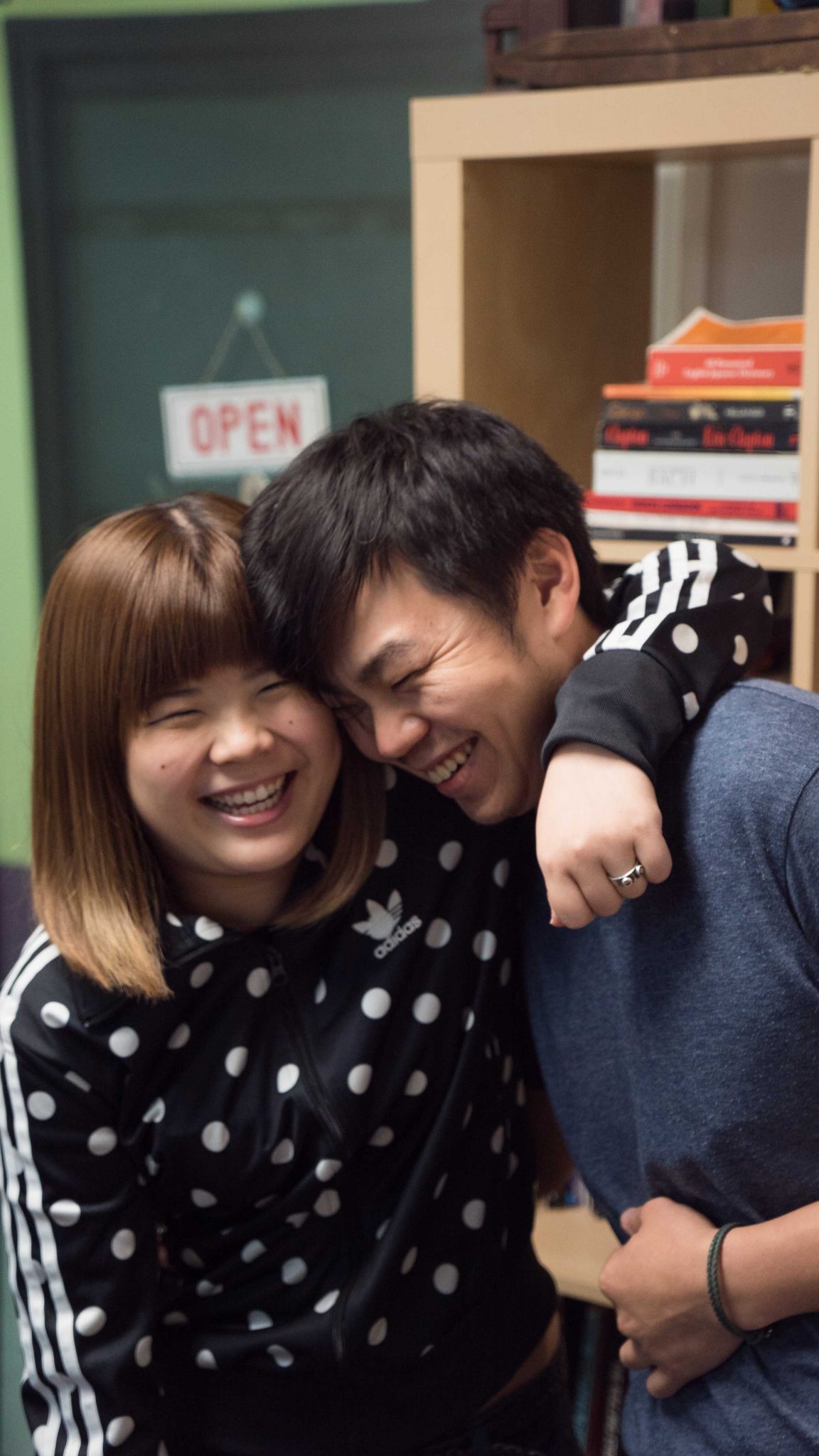 “I would deliberately choose a song to sing when I am angry, and then he will choose another song to respond, and sometimes he changes the lyrics subtly,” Ruby bemused, “after the performance, we will be ok.”

Surviving a musical rollercoaster ride on high moments such as appearing on national TV on One Moment of Glory, singing at numerous bars and having stints terminated without adequate notice, setting up a small music studio together with Jason at West Coast, releasing Ruby’s EP Circles, the two came to another momentous point in their lives.

Ruby, who surprised even herself, found a brand new faith in Christianity. Jacob, who has always been a Christian, relived the fervent lifestyle that he had abandoned years ago, as the couple has since been building their timetable around church activities.

And you are mistaken if their fervent attitudes dropped a hint about their choice to officially settle down, which happened not too long after, because plans to ink their relationship on paper were never openly contemplated. The intention definitely lingered in both their minds, but in their usual, non-romantic fashion, they only made plans the Singaporean way – get a HDB flat together.

But, every girl wants a proposal, ain’t it? When asked if Jacob did that before the new of them securing a HDB flat, Ruby just said “No leh.”

Thankfully, the boy was not going to take things forgranted and assume that there was no need for one. He was going to do it.

It was not something he brooded on for a long time, but when he was contemplating turning their 8th year anniversary celebration on 13 March into a marriage proposal, he encumbered under a cloud of stress and inadequacy. 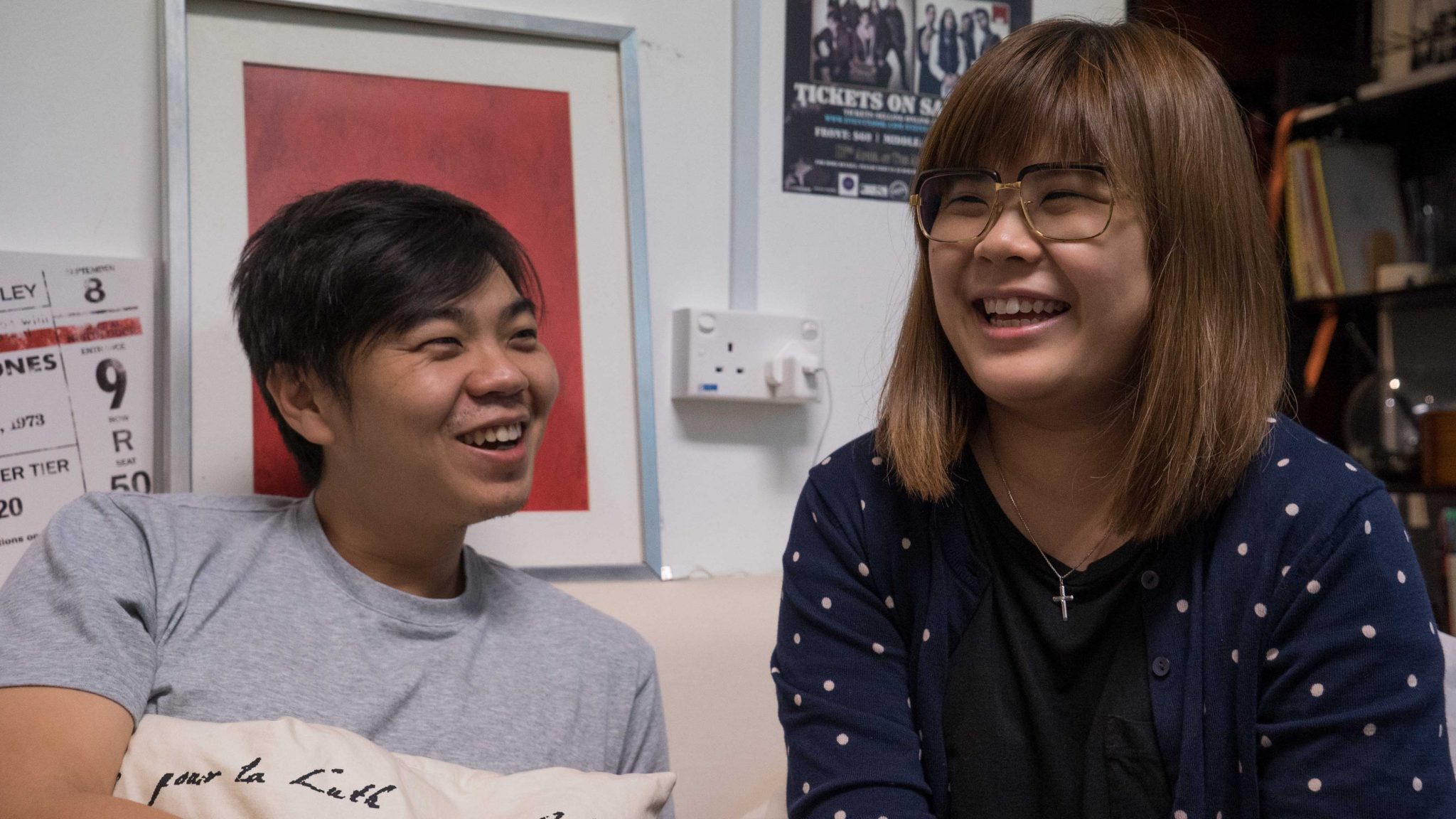 “I planned to get a bouquet of flowers to surprise her on the 13th, which happened to be a Sunday. I thought it would be beautiful for me to propose, but I need a ring.”

The inability to afford a ring sent Jacob into a downward spiral for days. “I can’t afford a ring!” he lamented. The seemingly poor chap felt that he could not create a marvellous perfect moment of proposing in church on the Last Scrutiny of Lent on their 8th year anniversary with a ring and a bouquet of flowers.

The night before he was still mentally tortured, after deciding not to rush in purchasing a ring with little funds and insufficient time. It sent him to the computer sending out resumes. Ruby of course, noticed.

“I haven’t touched my resume for many years, and I sent it out that night to a few companies.” The instability of being a musician had lingered in Jacob long before that fateful evening.

“He once took a picture of all his pedals and when I asked Jacob if he was going to sell them, he just said he was going to list them online and see what happens,” Ruby recalled.

The night just before they went to church, Ruby coincidentally joked with the boyfriend, ignorant of his plans. “Why don’t you practise proposing to me!”

When Jacob heard that line, he teared.

Beating himself up about the fact that he could not afford a ring, he sobbed himself to slumber.

Having planned the bouquet, not without its difficulties financially and logistically, Jacob made up his mind to just do it – without the ring. He knew that Ruby does not need one, as she mentioned it. 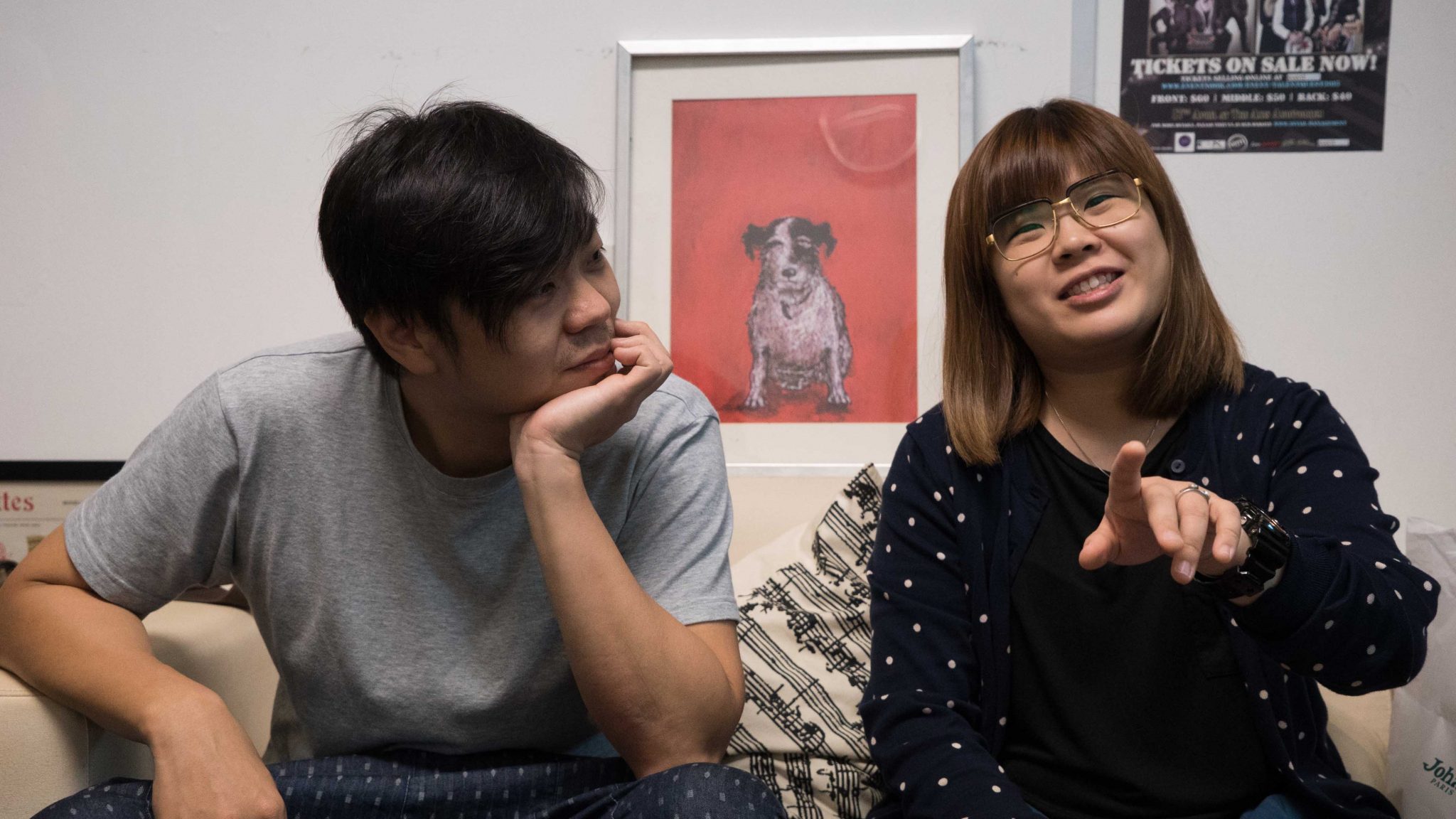 No one knew of his plans, and all he did was text his godfather at church in the morning: Eh I am going to propose later, help me take some videos.

What the! What bro?! So sudden?

Jacob had no time to react to the responses. At 1015 am after the mass, he had to slip immediately into undercover mode to hand out self-introduction cards to the parishioners. At 1035 am, he dropped down on his knees and handled her the bouquet, popping the question.

Came the emotional conclusion – they sobbed in each others’ arms.

There you go. Engaged. Their holy matrimony in January will be celebrated for the couple’s decade long journey in music, which has been shared with many musicians and friends.

No relationship is without its struggles, but Ruby and Jacob sing a sweet melody, triumphant over the difficulties of being full-time musicians. The obstacles of choosing this lifestyle have far from vanished, but this love story has its morals -ring, career or societal standards – do not matter. It is just between two hearts.

Singapore Char Siew Bao! is a four member band made up of Ruby Chen on vocals and djembe, Jacob Teo on vocals and guitar, Jason Loo on vocals and guitar, and Dominic Cai on vocals and saxophone. The merry bunch appeared on national TV in the reality talent competition One Moment of Glory and have been performing throughout various locations in Singapore through the years. A bilingual quartet, the bunch amusingly named themselves as such because of their chubby appearance.